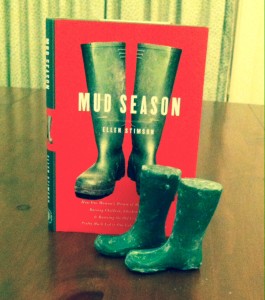 Well, dolls, this book tour is launched! And it launched just like everything else in my life, … with food. Good food. And gobs of it.  I meant to lost thirty pounds before this tour only I think I accidentally forgot. Really doesn’t matter now.

We started in New Orleans at the great cook, and food yakker extraordinaire, Julia’s Reed’s in the Historic Garden District. Cajun Curry and that was after a night at Herb Saint where I may have had the best bite of my life with that lump crab and watermelon gazpacho. Donald Link is a genius. I met him and told him so too.

We went to Peche the next day and had crab claws with chili and mint. Oh my. It was a Donald Link festival when we grabbed a traveling lunch on our way out of town at his counter called Butcher. I had a boudin sandwich with argula and practically swooned. Boudin is a white pork sausage made with the heart and liver and rice. It must be what God has for lunch…assuming he has a good cardiologist. And this didn’t even count that great lunch with old friends earlier in the week at Lilete where they make a salad, a simple salad with a pistachio lemon vinaigrette that were simply the best greens I ever put in my mouth. For about five minutes I felt virtuous til I ordered the skirt steak.

And then came Mississippi!

I must have been born a Yankee cause I would be too fat to walk if I lived down here with all these great cooks.

Julia’s Mama threw a little informal dinner party last night. I was tired and feeling introverted but I am at Mama’s and when you are at Mama’s you eat and by God you chat. Can I just say it was one of the best evenings I have ever lived? First was the food. Mama made her famous “ funny tomatoes” and if I told you what was in them you wouldn’t get it. When you come over for supper I will make them for you and you will not believe how happy you will be. There was a glorious fried eggplant and cheese grits and pork loin and corn. It was a southern summer supper that would have made Eudora Welty blush. The wine flowed and so did the glittering conversation. I heard a story about “Bill” Buckley and saw pictures to prove it and a few minutes later there was  a funny  tale with Al Gore as the protagonist. These people get around and fair warning they remember the good stuff! (Al was an old childhood friend of Mama’s and Mr. Buckley was a lifelong friend of Daddy’s…sweet stories one and all)

But then came the best part. The after dinner music. We had great singers among us and because I must have been declared princess for a day or something, they sang. Great old jazz and bluesy ballads.  Jessica and Eden Brent have the most beautiful voices I have met in a long while. Eden who is a professional opened up and her voice touched a place deep in my heart and wouldn’t let me go. Then Jessica joined in and I am telling you I know where I want my seat in heaven. Next to these two!

I am already thinking of a little Martha’s Vineyard wedding they could liven up.

Oh I almost forgot!  Jessica brought me a pair of soap muck boots that exactly match the ones on my cover. I’ll post a picture of them so you can see too.

It was a night to remember. This book tour is a whole new kind of blessing. I am one lucky lucky girl!