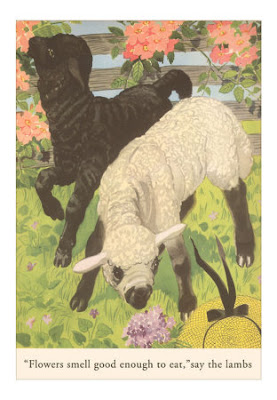 Hannah came home and together we went to meet the new lamb. We talked to ourselves all the way there. We don’t have to take him. We’d already compromised on a girl when we found this little guy who sounded so perfect. We had called shepherds all over Vermont. This one was originally from Australia. She doesn’t dock their tails because she believes in all natural farming. The lambs are raised on goat’s milk and organic grains that she grows herself. She sounded like a well-educated yuppie hippie who had actually done it, dropped out and become a self-sustaining farmer. She sounded perfect and so her lamb must be too. But just in case we wanted to be ready and able to say no.

Have you ever seen a lamb with a natural tail? They are very long and droopy and sort of ugly. I immediately felt guilty for not liking his tail. After all I don’t believe in circumcision and wasn’t this sort of the same thing? He was riding in her truck inside a crate munching happily on some hay. He had been a rejected twin and this shepherd had him in her kitchen for a few weeks. At about 8 weeks old he is three weeks older than Charlie and about three times his size. He looked more like a baby cow than a lamb. His tummy must weigh forty pounds all by it’s sloshing rolling wooly self. But he was sweet. He licked our faces and snuggled right into our arms. And Charlie will grow. You can’t reject a lamb just because it is no longer tiny adorable spring lamb size. Can you? Well we couldn’t. Being a little bigger should be no big deal. He drinks goat’s milk from her goats and she brought some along. She said he can transition to milk replacer but it won’t be as good for him and will cause some stomach upset. Okedoke. So we’ll call goat farmers until we find a source. That shouldn’t be a big deal either.

He snuggled without a peep all the way home on Hannah’s lap. What a sweetie. He is really just a big baby. He nuzzled our necks and ears. He seemed perfectly content. And then we got home.

We introduced him to Charlie outside and they seemed perfectly fine. And then Vermont decided to have a little spring snow. It has been 70 degrees up here but yesterday afternoon we got sleet and snow. So we hauled them back into the kitchen where our new pal proceeded to poop and poop and poop. He was nervous I guess. But he’s bigger and so the poop is bigger too. We ran out of newspapers and cucumber scented organic cleaner in the first hour. And he eats constantly so he poops constantly. And he is not paper-trained. And he can only sleep if we are sitting with our hands on him because he misses his pals. I could say the word and about a hundred more times and not begin to cover last night. We put tarps down in the screened porch and took turns sitting with the crying lamb. Charlie likes having a buddy, slept with his head on the lamb, but seemed appalled by the baaaing. He would walk over to his bed and look on imperiously as if he’d never seen such an unmanly display. The new lamb is clever and can open doors. When we left them for a moment or two he would open the door and when you came out there they would be baaaing on the couch. That may sound cuter than it actually was. Remember the poop.

Now they are eating hay together. Charlie has discovered the joys of social hay. And the lamb is quiet. That’s because one of my brood is outside with him. We did not solve Charlie’s lonely problem. Instead of having one lonely crying lamb in the kitchen we have two. Or in the yard. It was all too much and Charlie began sympathy baaaing about 4 this morning. This started out as a fun spring fostering activity I keep reminding myself. How did we get here? We are out of goat’s milk and calling every goat farmer around. Still no luck. The lambs are very happy together….well,.so long as one of us is with them.

Still no name. He’s too much a baby for many of the names we’d liked. My husband unaccountably keeps trying on Spanish names. I am sticking to the old farm names. Eli like rocker names and Hannah and Benjamin have offered an eclectic mix. We are an opinionated crew and this could take some time.

The new pre-assembled cottage barn is being delivered tomorrow morning. Because we have sheep. We are practically shepherds now and so, by God, we need a barn…fast.