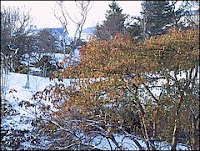 I drove home in a windy snowstorm last night ands it isn’t even Halloween. I had on these stupid pointy toed suede boots for which I paid way too much and that can only be worn for about one week in Vermont when it is cold enough for suede and before the real thing hits. It seems really early this year. But come to think of it I think it seems early every year. And then in April we all say how it seems to be hanging around later than usual. Those of us who have moved here from somewhere else all become new Vermonters again when the snow starts to fall every single time.

It isn’t very cold, so only an inch or two actually stayed on the ground and it will probably be gone by tomorrow. But for now with the wind howling and the branches covered in white with a few of their old orangery brown leaves still hanging on, the picture is like a colorized Ansel Adams. If air can have a color ours is gray, and there are just hints of faded color now amidst this cold study in black and white. The whole landscape outside my window is one of melancholy. The leaves will probably never all get blown or raked now. Like grasshoppers we started the chore a little late, and now the tarp is piled high in leaves and icy snow. The hundred or so trees on our smallholding give us many things including a big mess in the fall which because of this early snow will probably still be around in the spring, a little wetter and a lot heavier, but waiting just the same. The world cheerfully resists my attempts to order it.

I once ran for office and created an organization dedicated to helping protect a woman’s right to choose. I tried hard to elect a woman president and haven’t done much to stop this wretched war either. I say either, because I have long since lost the race and the taste for public office. Then I got a little jaded along the way. The organization that I helped found did as much crummy work as good, and while I like our chances in the election next week, this good man is not the woman I so dearly wanted to elect. And I have long since given up on public education for my own kids. I believe in it as a concept, but then Communism used to look good to somebody too. And elitist though it may sounds, I love our private schools. I loved homeschooling too. And the world remains quite content with itself in spite of my various attempts to save it. But my daughter wants to go to Darfur to take pictures and be relevant, and she’d also like to study with the Dalai Lama in India. She doesn’t know the world doesn’t want to be saved and so maybe she will save it.

I might think that doing a little is doing a lot. The day is too gray for me to be sure. But some things are better there than they were and sometimes we have to accept that the perfect can too easily become the enemy of the good. I moved to the mountains to live a life closer to the natural world. Here I have found a gentle beauty and a rhythm that has made me a better person and given our kids and our family lasting gifts we couldn’t predict before we got here. They will take those gifts and have bigger richer lives which will touch others in ways I can’t imagine or predict just now either. And it will be enough.

My Gram used to say, ‘Lord make me a blessing to someone today. I had to move a thousand miles, raise some chickens, climb a bunch of mountains and see snow in October, before I figured out she was right all along. A blessing to someone…
it’s plenty, or at least it’s enough….