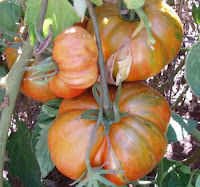 The end of summer in Vermont is conflicted. The gardens are bursting from all the rain and this tardy sunshine. The sun flowers are grinning and bobbing their heads looking like summer herself. They are huge and cheerful and we are filling vases with them all over the house. The tomatoes are finally red, hiding one minute behind a leaf, a quiet dash of orange, and the next jumping out leaving you wondering how in the world you missed this red ripe thing only last evening. And the flower gardens look like they are posing for a catalog. Everything is in full and glorious bloom, only it’s 52 degrees here this morning and the tops of the mountains are beginning to be tinged with red. I needed a sweater in the garden before breakfast and who eats watermelon when they feel chilled?

By mid day it will likely be pushing 80. These thirty degree shifts give me whiplash and everybody I know has a little bit of a cold. Nobody is really and truly sick, but we are all passing around this little bug that makes us feel colder than we are. And yet the counter is covered with tomatoes in red yellow, black and orange, and there is a pile of zucchini that is just waiting to be split and ladled with a little olive oil and Parmesan before spending a few minutes on the grill.

The flower gardens are a riot of color. The lavender is fading just a bit into a twilight of purple and sage. But the roses are big and flashy and they smell so sweet that the whole place smells like a party. There are Black Eyed Susan’s and every kind of Violet. There are these big lacy red things that looked pretty in those winter seed brochures and looks even prettier out there now. Darned if I remember what they were called. We still have all kinds of Lilies and there is Cock’s Comb next to Zinnias and all colors of Daisy. The whole thing looks giddy and happy like autumn is but a distant worry.

The land around us seems to know that there are real celebrations going on. It has been the week of the Democratic convention which is like the Super Bowl around here. My candidate didn’t win, but Barack Obama broke a different glass ceiling for African Americans. Last night was a monumental moment in American history whether Senator Obama was your first candidate or not. And then he and Hillary each got more votes than any other primary candidate in presidential political history. She at least cracked our ceiling and made its shattering something we could all imagine anyway.

Now comes John McCain aiming another shot with Sarah Palin. She will be the first woman at the top of the ticket in 24 years. She and I don’t share much political ideology, but our lives are now forever connected. When the time comes I will vote my interests, but today I celebrate and honor John McCain with his intention to be on the right side of history. Her place on their ticket is an historic moment for all of us and a joyful one for women of ideologies different than mine. . Perhaps it is a transparent bid to get Hillary supporter’s to switch. But he could have made other political choices, like an African American, or some other niche group whose votes he wants to court, including another white man from Michigan or Pennsylvania. But he did this instead, and I am grateful for it.

This is a moment that asks us to pay attention. We are less a bunch of red and blue states right now than we are all Americans sharing this historical stage. Neither side has the market on patriotism this morning.

When I am really worried or really happy I bake bread. In the winter the smell of rising dough makes everyone feel warm long before the oven gets hot. And while no one wants to make the kitchen hot in summer, if you can get it in early enough, there is something extra special about homemade bread alongside the freshness of the garden. Tonight we will have a bread and tomato salad with just picked berries in homemade ice cream for dessert. We will celebrate with a red white and blue supper on our table because the gardens aren’t the only thing blooming. History is bursting out all over….
It is a time to pay attention.

This is lunch all by itself and with a little grilled tuna on the side it is a perfect summer supper.