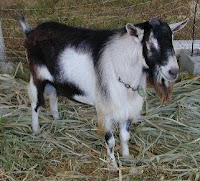 My 22 year old son came breathlessly into the house to tell me, on the last sunny day of the season, that there was a goat in our yard. A goat. Uh-huh. And, um… he was right. There was actually. It was a big fat Billy goat with a cute little black beard and chubby horns. In the city we mostly just got stray cats. Never a goat. I’m sure I’d remember a goat. Benjamin looked at me and asked, “So what do you do about this?”

Well, you catch it, feed it apples, and put it in the yard for starters. Then you call the local cheese makers and ask if anyone is missing a goat with a blue number 37 tag. Then while calling around and feeling competent and farm worthy you hear the goat mewing loudly and see your chickens running wildly. Just as you get to the window you see the goat effortlessly leap over the fence just like in the Rudolph cartoon. Then you go outside feeling decidedly less competent as you watch it run away down your road…

Now, at this point, after already having made a couple calls, people would knew I had the goat. They would be expecting me to manage it for an hour or so at least until the owner could be found. Otherwise they would all be talking about it for the next several mornings at the country store. (This is what comes from living in a tiny community…this…I… would be news) Plus in some moral sense I was now responsible for the goat besides. So since he was running down Kent Hill toward Route 30, I did too. Did I mention I was in my swimming suit? Or that this is not a particularly attractive thing? This is not the kind of swimsuit wearing you see in a Nordstrom catalog. More like the kind you see in a health aids catalog with the lady in the rubber bathing cap climbing into the whirlpool.

Off we ran down the hill with me calling, here goat heeeere goat….and him running much faster than me. He ran onto Route 30 where cars stopped and an older man in jeans and big worker dude boots got out, and headed toward the goat, who then immediately turned tail and ran right back to me as if we were lifelong buddies. The man looked at me standing there barefoot, in just my swimming suit, considering, and his resulting look said that I must be a pretty poor goat keeper, yessiree. Now, bent over and holding tightly to my goat’s collar, we trudged back up the hill where I found a leash, took him into the kitchen and resumed calling.

Okay, well, yes, I took him into the house because I couldn’t tie him up as the leash was short and so are my knot tying skills.

Turns out that Angela at Consider Bardwell Farms had lent two of her goats to someone who was clearing a pasture and yes, Number 37, Zeus, was one of those. She called the guy, who lost him yesterday, but hadn’t called her yet, apparently praying for a miracle while combing the local woods. Zeus and I went out into the yard to eat apples and wait for his pickup.

Just about then my husband pulled into the driveway. John sat in the car staring at me and the goat, remembering all that talk after we got the chickens, about my wanting a cow, just a little one, or maybe some goats,and ultimately decided….just to stay in the car. He figured that I had waited for him to leave town and had finally bought a goat, and he, by God, didn’t want a goat. Eventually he felt brave enough to get out and learned, Lord have mercy, that we had only a temporary goat.

But, since he did in fact get out of the car, I am thinking that maybe he is coming around to the idea of a cow…or maybe just a couple of minor goats.