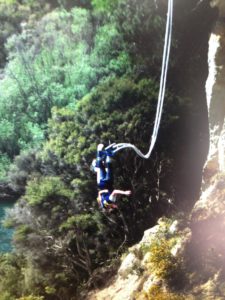 It’s been a week of high winds, cold air and leaves blowing about. The wind shows up every year about now when the time changes and everything shifts from summer to winter. This year though the the change has been in all ways bigger and deeper. Just like every other year the tangible stuff that needed putting away got put away, like the balcony furniture and the porch plants. The garden was tucked in for the year. Our winter coats got dragged out of the attic and are hanging in the closet next to the autumn capes because, after all, we know what is coming. Pretty soon the snowboard will soon be carried down from the attic along with the boots and mittens. We have been getting ready. But it turns out I had some other stuff to put away too. Like fear and protection and a sense of control. Turns out I really wasn’t ready for the bigger shift that I must have known was coming.

Our last child was going off on his gap year adventure this year. John and I would newly live in a house with just the two of us. We planned lots of dates and weekends away. We imagined cooking long complicated meals and eating them down in the meadow on a blanket as the leaves fluttered around just us and the dogs. There was a bustling book tour and so we would get to cities together where romance would get mixed in betwixt and between the business. Just like with the coats I was pretty sure I was ready.

I cried at first. I have always been lousy at transitions.  But pretty soon we then settled in to a routine that included lots of long distance talks and the time with John has been just as sweet as I imagined it could be. Eli would be home for Thanksgiving and there would be plenty to be thankful about when he got here. Then the surprises started in for real.  They have mostly come in texts and calls from 8000 miles away.  Eli is becoming the guy he was always going to be. I have caught glimpses hidden in the shadows of his teenage years. He has always loved adrenaline and high octane exploits. And now far away from the little village where he grew up he gets to pick and choose his own stories. They are surely his and not mine. He has in fact  had such a grand adventure that he called to ask if he could go on to Australia where he will help crew a big sail and get to dive at the Great Barrier Reef along with surfing for real in high waves with experts who will introduce him to the joys of the curl. Oh and he found a farming program that will allow him to work for room and board this spring in New Zealand. He is thinking about applying. This spring. New Zealand. A place that Google maps helpfully tells me is 8010 miles from Dorset Vermont.

There’s a girl. Of course there is. At just five foot high this California girl loves precarious thrills just like Eli does. The repelled deep into a cavern with millions of glowworms. ( More normal tourists go in by boat) They went scuba diving amongst sharks and swordfish.  And skydiving. They did a tandem sky dive and cheered each other on two days later at the highest bungee jump in the world. There was also the highest swing in the world which they accomplished upside down and facing backwards because, really, why wouldn’t you?

No one asked me if I thought any of this was a good idea. When I brought this child into the world I really thought I was going to have more of a say. I have a lot of good ideas and opinions. But then, you know, I got to know Eli. He came with his own share of opinions and preferences and apparently they include jumping out of airplanes and off of mountains. The girl was going on the sail to Australia.  We could have easily explained that the flights and fees were already arranged. He’s a thoughtful kid and he would have understood. We could have said that holidays end. After all everyone will be home for Thanksgiving and our family rituals matter deeply to us all. We could have said those college essays won’t write themselves, you know. We could have done all of that and it would have been just fine. We could have clipped his wings. Just a little. It was tempting. The alternative was to see if we could figure it out and encourage this new found freedom and first real taste of who he wants to be. It turned out not to be a simple choice.

But since his birthday was coming we managed to finagle the flights and get the trip extensions. Probably the birthday had nothing to do with it. That just sounded good. Because really how often will he be that close to the Barrier Reef  with a bunch of kids who love action as much as he does? This one could get a speeding ticket on his bike. His stories have always been populated with drama and now he is finally living them for real.  His only hesitation was missing the pumpkins. “Are the cornstalks and pumpkins up? Do you think you could still make some of our Thanksgiving foods in December?”

Yes and yes. We will keep it all going here. Now when he gets back there will be long ropes of pine and fir sprinkled with fairy lights and snow. I worried that he’d miss Christmas Adventure. Ha. “Are you kidding me? We’ll just go later the year, right? ” But this was going to be the year we went to Maine to watch Santa come in on the lobster boat. Oh well. That can come some other year. This year Adventure will  just be later. Because there is another adventure coming first. Have fun Eli. And just try to be a little careful for God’s sakes will you?