April 9, 2012 by Ellen Stimson in Uncategorized 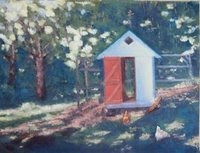 We have the cutest little Bantam chicken named Sally. I have no idea what breed she is. This is unusual here since historically we have had only Aracaunas and I always knew who everybody was and what they were. But last year I decided we needed a more colorful flock. Plus our oldest Mildred and Mabel will turn eight this spring and their egg laying days are few and far between.
Franklin the rooster was a sexing error and though a sweet dutiful rooster eggs are not among his talents either.

So last autumn we headed to a Vermont Bird Fanicer’s Club chicken swap and came home with a five new babies. We added little Sally who was so sweet and tame and since all of the chicks we chose were young and small her bantamness was also unknown to us. Sally hung out on her owner’s arm and the nice lady with too many chickens seemed almost reluctant to let her go. Then I wandered by and she hopped onto me. Chicken Fate. So Sally came home snuggled in my jacket.

We got a beautiful Brahma now named Naomi, a fanciful Plymouth Rock named Connie Brombauer and two Aracuanas I called Wanda Robeff and Edna Jones. (The original Edna had played the organ at the church where I grew up and Wanda led the choir with her high soprano voice and pointy toed shoes.) We also have Abigail, Adelaid, Nellie and Poppy out there. They are Americanas and hang out mainly with the older gals and Franklin.
Twelve friendly chickens who resist my attempts at order and control no more than my kids always have but with much less angst.

Chickens are fun companions. They beg at the kitchen window where they are rewarded with last night’s leftovers and spend their days in industrious eating, waddling, clucking, scratching, and laying.

Sally hangs out with the flock but as they grew bigger and louder she stayed little and adorable. Naomi the big flashy brown and white Brahma started treating her like her chick. She clucked after her and scooped her under her wings at night. She sleeps curled next to Naomi on the perch still and they are seldom far from one another in the yard either. Sally is a creamy buff color with a few brown specks. She lays very small brown eggs. Maybe she is a Wynandotte. I may not know her breed but I know her. She is brave and curious. Tiny but determined she pushes and weaves through the flock in front of the kitchen window so she can have her share of potatoes or whatever is on offer that morning. I worry about her. She is curious, heading into an open basement door, looking for snacks under the grill and curious chickens often have short lives. Plus she is so little. A hawk might think she is the perfect size for supper, light easy to carry with a nice round belly from all those potatoes and pancakes.

Now we have been known to take a chicken with a broken leg to the vet. We have also had little memorials for chickens who have spent years with us. But we have also dumped the chicken leavings of a fox into the trash with an emerging farmer’s view of the transient nature of the life of a farm. My chicken philosophy like my policies on giving money to city panhandlers or the homeless—varies

It’s spring. The fox mamas have kits to feed and the fox daddies are out hunting. Some chicken owners, preferring a more sure safety, leave their birds in confined coops. We have a fancy henhouse and a fenced in coop for the days when we have seen the fox or hawks hovering. But no chicken wants to live cooped up. Ours are always fluffy. With lots of room to roam they never peck at one another so their feathers are always full and beautiful. They are doing what chickens do covering a wide swath every day as they wander and look for the best bugs, visit with us at the kitchen window, take dust baths and siestas in the sun. They are obviously happy chickens laying well and living long natural lives when the wildlife doesn’t interrupt them. But a chicken’s life is a fragile thing full of risk. Our old hens Mildred and Mabel have seen wild dogs come into the yard, foxes and hawks. They have seen their friends disappear and both have survived an attack.

Still even with the hip yuppie henhouse they choose freedom. They wander and explore and live their chicken lives. They seem to embody the old adage that life is short so…they eat what they love, celebrate the laying of the egg with loud happy clucking cheers, bask in the sun when it comes and work when it doesn’t.
I think maybe there is a lesson in there somewhere for the rest of us.