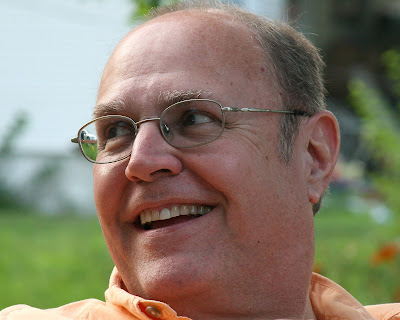 “Stephen Russell Stimson III, 58, avid naturalist, sportsman and collector, devoted father, and student of the arts and sciences, died of natural causes Friday, March 11, 2011, at his home. He was a lifelong resident of Edwardsville and graduated from SIU-Edwardsville in Urban & Industrial City Planning. He began his financial career at Newhard Cook & Company, retiring from Huntleigh Securities as a senior vice president in public finance. Later in life, Mr. “Steve” Stimson helped small businesses manage complicated tax issues for the State of Illinois.

Steve Stimson skillfully straddled the line between devoted hobbyist and lay scientist. He loved to share his passions for botany, astronomy, optics, and history with all. In addition, he was an enthusiastic food and wine connoisseur.
Part of an extended, blended family, Steve will be especially missed by his friend Kayde Carter; his sister, Mindy Stimson; his Uncle David and Aunt Ruth Stimson, his former wife and her husband, Ellen Stimson and John Rushing; their children Hannah and Eli Rushing; and, most of all, by his son, Benjamin Stephen Stimson.

Services for Steve will be led by our family friend, Steve Mudge, and held on Saturday, March 19, at Weber Funeral home, 304 North Main Street in Edwardsville, Illinois. Friends may call from 10:00 am to 11:30 with the memorial service beginning at 11:30. A luncheon will be held immediately following at one of Steve’s favorite restaurants, Neruda, #4 Club Centre Ct , Edwardsville, IL 62025. In lieu of flowers, donations may be made in his name to the Metro East Humane Society where he found his longtime companion, Lady.”

Some things are too big for twitter. But people who write, who tell their stories on paper will eventually get around to telling them all. I have been quiet for a while because I have a story that is hard to tell. My oldest son’s father Stephen Russell Stimson 111 died suddenly and shockingly on March 11.
I have long joked that Steve and I were married for about fifteen minutes one spring 26 years ago. But that joke does not begin to tell the truth of this relationship that for the last quarter century has been one of the most important in my life.
Our marriage was short to be sure and filled with strife and pain. And if it had ended there I wouldn’t have much to say. I might been be glad to see the last of him. Back then I probably would have been.
But like all good true stories this one evolved and meandered along for the next 25 years until it became something quite lovely. Steve was my close friend. His humor, usually in emails almost every week, and sometimes twenty in a day held me up through my own mother’s funeral, the Alamo, formerly known as the quaint country store, and dozens of scrapes and celebrations our boy got up to over the years.
I remarried luckily and well. My marriage to John is one of the best things about me. And Steve, John and I were a parenting team. He came to every soccer game where John coached his son and cheered as loudly for the coach as he did for his son. He jumped and hollered at basketball games and called and said goodnight every day for about thirteen years until a teenager felt too old and told him he could stop. Back when we all lived in Edwardsville he had supper at our house 2 or 3 times every week. He was our babysitter on date night. Truth be told we were all a little bit like an Alan Alda movie.
Steve knew me when I was just barely out of Granite City. I had not yet learned how to make money and couldn’t have imagined dinner with the vice president. Last year when I had that dinner and dozens of others like it that still leave me wide eyed and giddy, Steve proudly told the story to anyone who would listen. In a way he was more like a brother to me than a former husband. Nine years my senior Steve came into our marriage with a whole bucket full of sadness, anxiety and worry. It would take him years of therapy to calm his demons and make peace with the fear that chased him. At 22 I was no picnic either. Way too dramatic and immature I was ill prepared for another complicated personality and I took our baby and ran. Steve understood. He would have run from himself too if he could have. He had the harder job staying behind and finding a way to live more calmly and eventually even happily. Luckily we both improved with age.
And when he died his house was littered with the detritus of that fascinating man who had found peace and a lovely way to live. There were thousands of books and articles covered every surface. He had been researching hunting dogs for Benjamin, a rental in France, reading up on learning Chinese, distilling bourbon, and studying game recipes for cooking the birds Benjamin was learning to hunt.
When he visited Vermont he stayed with us. Our other kids called him Uncle Steve. He taught us all about flora and fauna, the night sky and how just about anything worked. His life had been years in the making and I had a ring side seat for most of it.
I have been crying a little everyday for what we all have lost far too early. He would have been a wonderful grandpa. As it turned out he was the best ex-husband a girl could have.
I miss him.