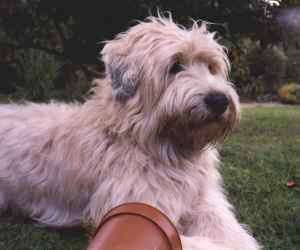 Oscar is the most utterly open and loving creature I have ever met. He looks for the best in everyone he meets and always finds something. Recently Violet, a beautiful baby Bernese Mountain Dog, has come to spend her life with us. Oscar is completely and utterly smitten. He thought maybe we got this puppy just for him. She is small now but not for long and she already gives as good as she gets. Oscar pulls her around by her abundant tail and if she seems tired of the game he runs, gets her bone and puts in her mouth before he starts pulling again.

If he wants a game he grabs half of one of the many dog toys that cover our floors and puts it in her mouth leaving enough for him to grab and then he pulls her by the toy. She loves him too without reserve. She follows him everywhere. If he sits at attention looking out toward the woods at some rabbit he thinks he has spied, she sits right alongside in the exact same pose. She naps too as close as she can get curled up next to him.

I do not believe he has ever once growled or even looked worried over anything. Hannah has a bunny named Lulu and he watches her with a keen interest but does not give chase. He sits and stares, licks her when she lets him and all the while seems mainly just grateful for the chance to be near a bunny of his very own..

Now we also have Pippi Hannah’s Moodle. Pippi is less impressed by all this fribvolity and though she is little too she has a teeth barred cujo stare that might look pretty fierce to a puppy. The other day Violet was trying to get Pippi to play only the Pips was feeling annoyed and superior and began with her theatrical growling maneuvers. Violet looked a little hurt and Oscar ran over and stood between them. This made Pippi even madder and the growling picked up and grew something close to actually menacing. Oscar walked up to the sofa where Pippi was now poised to pounce, growling and showing all of her teeth. Her tail was down and her ears were back. Violet was backing away and looking worried. Oscar reached up and gently laid his paw on Pippi’s shoulder. He looked at her with a calm and steady gaze. It was a gesture or total love and trust. And Pippi stopped. She looked at it and him for a second before settling back down. He’d gentled her with love.
Another dog would have barked. Another dog would have gotten excited.
Not Oscar.
Oscar is the love dog.

He has utter trust and acceptance of other dogs and people. He seems to be free of any of the instinctual fears that most animals have and show from time to time. He loves everyone in the family showing no favorites. He is thrilled to see each of us when we come back from the world or just down from upstairs. He loves the snow. He loves his bones. He is plainly happy with his life here with us and means to show it.

My job it seems is just to try and be the person Oscar thinks I am. It is humbling being one of Oscar’s people. He calls us to be better than we probably any of us are.
Oscar is the most clear and shining example of unconditional love I have ever seen.
How did we get so lucky?