November 7, 2010 by Ellen Stimson in Uncategorized 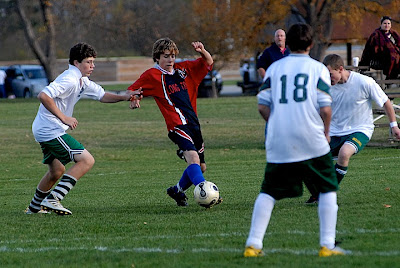 When he was a baby he would hold his palm against my cheek. I’d never had a baby hold my face before. By the time he was two he would notice my nail polish when I came home from a manicure. “Pretty Mommy”, he would say touching my French nails. Like all of our kids he slept in the big bed with us. He would roll over in the night when he was three or four and lift his sleepy head, eyes still closed, kiss my arm, roll over, snuggle in and go gently back to sleep.

Last week, November fourth, he turned fifteen. How does this happen? How do these sweet little babies grow up so fast when we the adults in the room are not getting any older?

We spent his kindergarten and early school years in a coffee shop before school every morning. He’d have a chai latte alongside my coffee and together we would munch on a croissant and play endless games of chess next to a cheery little fireplace. His funny running commentary would make me laugh every single morning. In retrospect it was the most natural thing in the world to homeschool and by the third grade that’s just what we were doing. We’d trek down to the pond every couple of days to mark the changes there. We studied pirates and Daniel Boone, cowboys and Davy Crockett. We followed his interests and worried only about the learning as opposed to the content. We read Treasure Island together in the fourth grade. Turns out Long John Silver was meant for little boys. So was all the early American History rich as it was with swashbucklers and thieves, soldiers and heroes. We had a blast and I learned all that stuff I missed in my own elementary years. History was never brighter than when we were wandering around Salem imagining the Witch Trials or curled up on the couch in front of a fire reading about our buddy Davy. The explorers were fun too. Eli worried that now that we’d discovered all the important places that all of the really good jobs were gone. What could you be when you grew up if you couldn’t discover a new land or find gold or fight some Indians? The homeschooling days were some of the favorites of my life. They were the big surprise so far of these middle years. When he was twelve he went back to school. The days surrounded by kids were like a party. That was the same year he saved up his money and surprised the family with a group gift for Christmas. He bought us a ping pong table…tournament sized. The thing is huge. The only room it fits in is our bedroom. So now every winter we drag this enormous thing out and the whish and thwack of balls and paddles are the steady beat behind our winter weekends. This year, his high school freshman year, he has his dad for English so they are getting another go together, They both love it which was a relief for everybody John is Eli’s favorite teacher. It is another gentle satisfying spot that will hold us all in good stead.

These days I bake unending supplies of mocha cupcakes and homemade pizza, stromboli, and steak with balsamic thinly sliced into giant piles that he and his best friend Timmy seem to inhale like air. We cheer him on in soccer matches, and watch his feet fly and turn and trick his opponents. Even his feet seem to have a sense of humor. And afterward we take his gang of four to scary movies, and haunted houses. “Are you the kind of mom that minds when kids run up the down escalator”, asks a new friend. Nah. And they are off tearing through the mall, the ever present skateboards under their arms, loud, laughing, and cologne soaked. But when we get to the exit there is my boy, the one holding the door open for me and whomever else happens by. Only once has he ever gotten into any trouble and it was so out of character none of us knew quite what to do. So we turned it into a funny story and each of us has a version. Now even Eli wonders what must he have been thinking that day.

Mothering Eli, who looks so like my husband and has an exact replica of his sense of humor, has been the sweetest pleasure. Happy Birthday kiddo. So far so good……