October 17, 2010 by Ellen Stimson in Humor, Living With Intention, Parenting 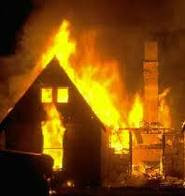 When does parenting stop being a verb? It might be when you burn down your house or then again it might not.

So I set my house on fire. Actually it wasn’t the whole house. It was really more like just the dining room. And truth be told, it was really only the dining room table although you could not tell that from the black smoke billowing up the stairs or the foot of it that hung from all the low ceilings in the 1836 end of the house. But it can all be explained.
First I was having a dinner party and second our twenty one year old daughter was bringing home her new thirty four year old boyfriend. There. Isn’t that enough?
This was a teensy little bit unsettling even for us so called liberal parents and so I commemorated the occasion, as one does, with a nice little house fire.

I had these new purple napkins that I was excited about and wanted to use purple candles on the table. I was up early cooking for the boyfriend brunch and would spend the afternoon cooking for the dinner party. It was going to be a long day and I was attacking several pieces of it at once..the table could be managed while I started the latkes. Like that.
Only when I got out the purple candles they were all different heights so I lit the tallest and decided to let them burn to even them out a bit. At the same time I had gathered a bunch of lovely orange and golden autumnal leaves for the table which I scattered prettily and since the latkes were done and the pastry was rising I had time for a shower.
That extra time was misleading. It is astonishing how much time a fire will eat out of your morning.

I was curling my bangs when I first noticed the smell. I have lots of naturally curly wild unmade bed kind of hair and a curling iron sort of even things out around my face so I look less like a member of the Band Aerosmith and get more of a gypsy vibe. Yesterday my hair mattered. And I smelled that kind of burning smell you get when the curling iron is on its last legs. “Perfect” I seethed. “My hair will be wild and horrible today of all days. Come on, just flatten out these bangs one more time” I was talking to the curling iron when I noticed that the bathroom had gone awfully dark. Must be some storm outside I thought absently as I hurriedly wound hair and clamped. And then I started coughing. I have asthma and figured it was pre irritating-new-boyfriend nerves, when finally it dawned on me that I was surrounded by smoke. It wasn’t the curling iron. The damn house must be on fire.

I ran out of the bathroom shouting down to my husband John who, obliviously, sat in the library drinking his coffee and reading the newspaper. “Get the animals, and hey Eli hurry the house is on fire”. I wondered if I had time to get the ornaments out of the attic…(Now I know how to answer the quizzes that ask what you would save first in a fire, my kid, my animals and my Christmas ornaments apparently), when John shouted up through now billowing clouds of black smoke that he had it. It was the dining room. I shooed Eli who also has asthma out the door with the cat and the dogs and headed for the fire extingusiher, wondering how it worked and how I could possibly be expected to read the directions in all this fucking smoke?!, when John told me it was out. He’d done it. Apparently one of my too tall candles had dripped a spark on the lovely…apparently dry…leaves and the big old solid grand oak table had slowly inexorably burned.

Meanwhile we realized that our cleaning staff apparently does a poor job with cobwebs while we had a little lesson is conceptual physics. Lighted cobwebs that likely have old dog hair caught in them dance merrily across the ceiling sizzling and burning in a long black curling trail sort of like you might see in a haunted house. It was really very much like the haunted house at Disney only with a smell that was not nearly as pleasant as the manufactured ones of campfires and candy corn on a Disney attraction. We actually considered, or I did anyway, in the middle of the chaos of the smoke and the fire, calling Irma our housekeeper and asking her to come and see the cobwebs that they apparently never clean despite being on our payroll two days a week. That may have been a low point in a long series of them. Another was when I asked John if his feet, (only in actuality I used another body part as an example) would have to be on fire before he noticed that our house was burning down. He calmly reminded me that it was our table not our house that was burning down and also that I had in fact started the whole thing to begin with.
Oh. Well yeah.
And now my beloved table was deeply burned, charred and scarred. And the boyfriend was still on his way.

Meanwhile we called around and got a sander, too small, and a worker dude with several sanders, who sanded off the worst of the char so that we could cover it up with a tablecloth until a proper refinsihing could be accomplished. We opened windows and turned on the attic fan and by supper the smell would mostly be of a nearby campfire. So see I was just fine about this impending visit. I mean okay my back hurt, the cooking was a tad behind and yes okay, so we’d had a little hardly worth mentioning fire. But no, really, I promise everything was fine, completely fine.

The boyfriend came. The visit was fine. Our daughter may be doing her version of Eat Pray Love. Fine. Nothing terrible. But neither was there the thrill of validation, of a connection based on mutual awe, respect and admiration. Not the end of the world and not the thrill of a lifetime.

And then came the dinner party where the fire story led off followed by tales of parental woe with adult children and their love choices. I think every parent there could see the value in an arranged marriage. One though pointed out that since at twenty-one you could no longer make their choices for them being quiet might be the virtue to cultivate. Since I had practically burned down my house in an effort to stay calm and behave well I may have had sort of a values disagreement with that one. That parent is smart elegant and progressive. I also think she is wise. She respects her adult children and their choices by keeping her opinions mostly to herself. Another parent had an adult child in a serious long relationship that they, umm, dislike, or maybe are disappointed by…something in that general arena anyway, and they are regretful of having said too little in the progressive-leaning ‘let them work through it’ mode. They are disappointed for their child and wondering how to assert the disappointment in a helpful and healthy way now before it is too late.. They want to teach their child what they know. Should they? And how?

I lean toward believing that parenting is a perpetual verb. I think it will look different at eighty than it did at thirty, but that it is a lifelong calling to guidance. I think we parent actively all of our lives, teaching them first how to live in the world and how to navigate education. Next we teach our ethics, how to add value to the world, how to make one’s self happy, and hopefully about marriage and parenting. Finally if we live long enough we can teach them what we know about being a mother-in-law or a grandmother. What we begin teaching them about how to be married and happy by example when they are still toddlers continues in conversation and example with their adult selves. I think we are lifelong guides and to abdicate that role at any stage for the easier adult friendship is an error that over thinking progressive loving parents make. Even if we are quiet we are still teaching.
My Gram never thought twice when she told my mom that babysitters would screw me up after my dad died and mom had to go to work. She offered herself up as a caregiver and happily mom took her up on it. She never shirked from offering my mom dating advice or even telling her she better “forbid me to wear that eye makeup that made me look like a fly and would attract all the wrong sorts of attention.” (Forbid. A formidable word that no parent I know has in their vocabulary) My mom was in her fifties. Gram was in her seventies. Clearly I learned by their example.

Our kids can freely reject our positions but to keep them hidden denies both the responsibility and the need inherent in the relationship. Naturally I respect my adult children’s choices and their right to make them once they are made. My obligations evolve as their decisions do I guess is what I think. They will make their own friends. But it is our particular job to be their parents. I think this is what I believe anyway. I am thinking hard about it all these days. I think I think it even if in figuring out how to do it and what that means at any given stage means burning down the house….