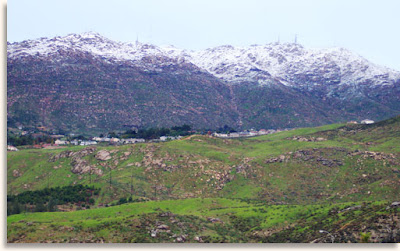 We got a little snow up here this weekend, but it was all gone by afternoon. It wasn’t even enough to make us crabby, because we have blooming crocuses and daffodils who are right behind. There is still some snow up on the mountains but there is green down below, hallelujah. We are all drinking from the magical cup of photosynthesis. The days are young and sweet and we feel lighter and ready for the change.
The financial markets are still careening out of control, but all these little bubs buried in dark earth on a cold autumn day by someone who planned with sweet expectation gives that feeling of hope to all the rest of us. I am grateful to all the bulb planters everywhere.
Where I used to live in St Louis there was a long highway called I40 that crisscrossed the whole city. One year a Mayor decided to beautify the city by planting daffodils all along the sides of the highway. There were kids in orange vests out there for a few weeks in October digging little holes and sticking their bulbs into the ground. Everyone teased the Mayor about using the out of work teenagers and said there would probably be no flowers come up, or if there were they’d come up all in a clump where the kids had ceremoniously dumped their sacks before running off to hide behind a billboard and grab a smoke. It was the stuff of newspaper jokes all fall. Come the next twenty something springs though this was one of the happiest sights in the whole world. This dirty dingy highway littered with ugly billboards, and in places bumper to bumper traffic, was reborn every spring by one man with a little vision of a few flowers. When we left for Vermont the flowers were beginning to get sparse. I wonder if some new Mayor will have the same forethought to add a few more flowers more and keep the happiness coming. It only lasts a couple of weeks, but a couple of weeks of cheerful people smiling when they get to the office is some kind of miracle in any city, especially one plagued with failing schools, ugly highways, high crime, and rising unemployment. But bring on the daffodils and things seems possible again.
For a few weeks Americans are all in this together. Pretty soon San Francisco will get is chilly summer fog, Florida will get the Disney vacationers buying those little fans atop their water bottles, Phoenix will begin to bake, and Vermont will get the hot New Yorkers and folks from Connecticut who want to share our mountain breezes. But for a few weeks we are all sampling the tulips, looking at the new shoots and being glad for the Easter story of renewal and rebirth.
That’s what spring does. It reminds us that job or no job, 401k or not, some things can always be relied upon. It says hang on, things will get better. The sun comes back. The pear trees bloom anew and there is hope out there in the sweet simplicity of the repetition.