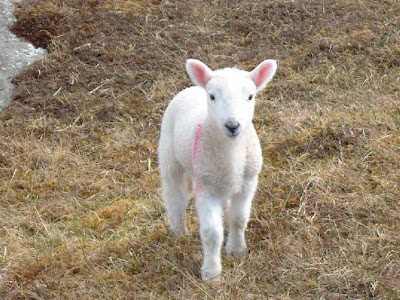 We are not cut out for farming.

We woke up to a dead baby lamb. We went to bed after bottles and cuddles with both of them in front of reruns of In Treatment. They like a long snuggle after their bottles. Especially Daisy.

Daisy never had a mom and she has been glad to let us substitute. She would sit with legs curled under in your lap for an hour or longer if Charlie wasn’t baaaing and jumping and begging her to play. She would reluctantly look up for one last cheek rub from John’s beard, or one more ear scratch from me and climb down and let Charlie chase her and play the head butt game. She loved having a bath.

She must not have gotten any colostrum. She has had all manner of little infections. She had a joint infection from a compromised umbilical cord. She had a mouth infection that forced us to encourage her to the bottle for two of these four weeks. She was never as robust or as fully a leaping playful lamb as Charlie. She was paper trained. He chews up the paper.

And last night some little bug that any other lamb would just have fought off got her. Maybe it was bloat. This can happen when the fat in the milk replacer mixes in a hot tummy and causes a gas that cannot be expelled. She had hiccups and then she died. It was as simple and as devastating as that.

We called the farmer for whom we are fostering and he was quite philosophical. He said this little lamb almost died two or three times in her first week. She just wasn’t meant to make it. Happens. Thanks for calling.

John is burying her and just came in with a tear stained face.

I am holding a lonely and confused Charlie. Going back to the flock will be an even tougher adjustment for him now. Those sheep are wild. The dogs are guards and not playmates. The farm humans are barely interested. He will be bereft. Maybe fostering these lambs was wrong from the beginning. The farmer reminded me that he’d had too many bottle babies, but that this is always tricky.

Then he asked me how many bottles they are still getting. He told me to make sure Charlie is getting them now at room temperature. He reminded me that they…he…. will nurse for a year allowed, but that will make his return to the flock even harder. He matter of factly suggested cutting a bottle today and another by Saturday so he’s down to one per day. More hay, more food, less attention. The loss will be easier if we begin it gradually. Of course he’s right. He runs an ethical farm with much success. He has the oldest flock in Vermont. There is a lot to be learned form this strong kind man.
But Charlie is bonded to the dogs and without Daisy his affection will only increase.

Shit…I am not cut out for this