What Passes for Spring Up Here 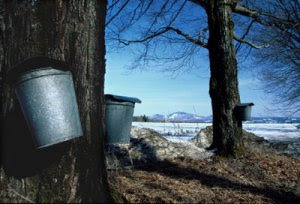 A couple of days ago I declared that winter was over. I am sticking to it.
Yesterday we began daylight savings time and what a glorious beginning it was. It got up to 50 degrees here and most of the snow melted. Oh, we still had those three and four foot icy drifts against the house that would need chiseling and way more sun to get going. But most of the stuff was really and finally gone. Old ladies all over town were hammering away at the ice with rakes and shovels and picks. It was as if someone had announced a spring-cleaning party. Everyone got the memo. We were all out there. Even the robins were hanging tight to the apple trees and making their glad sound.
We started picking up branches and carrying them to the woods. I hung a little painting on the front porch and brought out the pillows for the swing and the chairs. We took away the winter locks that tighten the doors and keep the wind at bay, and threw open the front doors. The dogs ran joyously in the mud and flowed the rivulets of water down into the meadow. We had tiny little streams and itty-bitty rivers all over the place.
Next I put away anything in the house that felt like winter including the drapes of red berries covered grapevines that twirled around the mirrors and over the mantels. One was festooned with swags of felt hearts and there were birch branches in vases covered with little pink and red felt kisses left over from February celebrations. The old French glass pinecones were put away and the German glass Easter Eggs filled the bowls instead. A couple of springy looking old iron rabbits hopped out onto the sideboard and the candle sticks all got dusty purple to replace the bright red tapers that had been melting since early February.
We changed the snowman flag to one with irises and pansies. Because the declaration had been made and it was time to follow through. We even emptied all the porch pots and carried old withered plants to the woods. The sun stayed out until at least 6:30 and so did we. Supper didn’t come around until after 8.
Of course today the schools are on a snow delay. The roads are icy and the white stuff blankets the land. This is what they call a sugaring snow. Big fat wet flakes and higher temperatures again tomorrow will have everyone tapping trees and boiling sap. It’s running strong now. Low temps at night, plus a few wet snows, followed by sunny warm days equal thick rich maple syrup for which every farmer up here is known. I love to go into the sugar shacks and breathe in the hot sugary smell. There are four grades from fancy down to B. But each farmer creates a taste of his own from the age of his maples and the temperature of his fire. True Vermonters prefer the B and we have developed our palettes over the years. No more thin lightly flavored pale amber Fancy or Grade A for us. No siree. We are real B people now. We like ours dark and thick, not heavy like molasses, but richer than the diner stuff and with a deep maple flavor that lingers.
So it looks like winter again out there and the purple, orange and blue glass eggs inside seem a little premature. But no matter we have had a taste. This is just a little spring snow. It won’t amount to much and by tomorrow or Wednesday it will be part of the flowing streams and mud rolling down the mountains. This is why they call it the sweet valley. The mud rolls down rich with nutrients and lays the foundation for the riot of color that is surely on its way. It’s snowing. We need a fire this morning. Because finally, it is spring in Vermont.