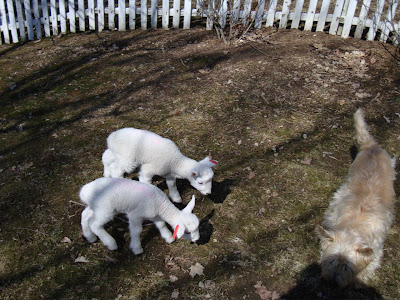 We do not live on a farm. We live in a high end little picturesque village in Vermont filled with people who moved here from somewhere else. Most of them came from Manhattan and more than half live here only part time. But we live off a little lane up a hill from the historic village center, backed and wrapped by a forested and protected knoll, and so our chickens and critters are more of a hidden secret. But these lambs have brought up some questions because you see, we are not farmers. Most of what I know about farming comes from the See and Say I had when I was about one. I know what sounds the animals make and I know roughly what they produce, sheep-wool, cows-milk, like that.

But I don’t know what it means when a lamb coughs. I don’t know the diseases of sheep and how to treat them. I do not know how to mend a fence, or to keep the lambs from eating the little irises that are just pushing their sweet little green heads up out of the cold dark earth. When my friends Karen and Jack brought their little dog Madeleine for supper the other night and she decided to chase the chickens, I knew that chasing her would only excite her more. I knew that and still I chased her and screamed. Stories with dogs chasing livestock, especially older animals like our chickens, often have very bad endings. The chickens were clucking and scared out of their wits, Madeleine was agitated and couldn’t hear her name let alone respond to a lie down command, and I was running and yelling like a fish wife, sweating and coughing, being chased by two frightened baaa-ing baby lambs, and finally running smack into my friend Jack who looked like he might have a heart attack at any minute. Eventually somebody nabbed the dog, and the chickens flew into their house, and the lambs got bottles and rocked, and all was again right with our little world. None of this was the dog’s fault. It was the fault of the non-farmers who should have never let a strange dog into the yard where it might be enticed to molest the livestock.

And so, should we really be considering keeping these little lambs? We don’t even have a barn. We have a fancy chicken house that looks like something some silly yuppies who wanted blue eggs would build. There is a coop out back where we could expand and add a place for the sheep. But it will cost a bundle to heat and side and insulate etc. And there is a fence around part of the smallholding but it too is mostly just for show. It will need shoring up. And we’ll have to fence in the garden. Sure the lambs are only fifty bucks apiece, but the rest will be well into the thousands. And we like that our dogs and cat and chickens hang out with us in the yard. Will the sheep? Because at the rate they are downing these bottles that is what they surely will be, probably sooner than later. Charlie can jump three feet straight into the air. It is like watching the Christmas Rudolph cartoon, only the live stage show version. He runs sideways kicking up his heels behind him and twisting and turning in the air like a little circus lamb. He is the epitome of a spring baby animal feeling fresh. He is joy in a wool suit. He runs circles around Daisy as if to say Look at me, I am a RAM! He may only weight five pounds, but he is destined for 300 and he wants you to know that he knows it.

For once I am trying not to control the decision. I am trying to just be with these little creatures and let the group decide or maybe even the lambs. I have long coveted a cow. But are we ready to abandon the idea of the Vineyard for a big hunk of the summer? What do I know about cows after all either? Everybody has the right to begin and to learn something new of course. Is that what I am aiming at? Have I secretly decided I want to be a farmer, even boutique sized? Do we want to have to hire a caretaker with the expertise of a shepherd or a dairy farmer when we travel? Will these little guys come when we call them? Charlie already follows me around just like the Mother Goose rhyme promised he would, but will he when he weighs a hundred pounds? How about when he gets to three? Who will trim their hooves? Do they have books for this sort of thing? Who will shear them in the summer? Is this really what we want to be doing in our middle years? And what about that year in Italy…..the questions are piling up.

These baby lambs were a surprise. It had been a while since we got a big surprise in this family. It was welcome and sweet, and we responded and are happy and glad. But now the next bits cannot be a surprise. We must decide and plan or it will surely come to a rough end. Last night when they were curled up in front of a spring fire, after being given their bottles and a little warm bath, they looked like an old oil painting come to life. Their black noses were outlined against all that white wool and their eyes were heavy with a milky sleepiness. The curled around one another and baaed and cooed quietly to sleep. The beauty of the moment took my breath. I will always remember these little lambs and this wonderful spring. But soon some decisions are going to have to be made….