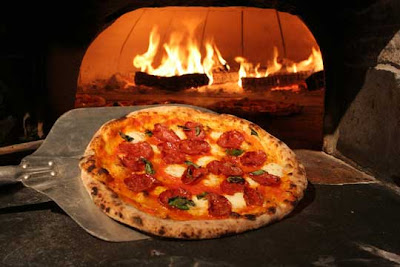 It is hard to know just where this story begins. Our kids were all home throughout the holidays. Mostly they ate or talked about eating, or cooked, or were underfoot making just a little appetizer while we cooked. College has apparently made them very very hungry. Plus it’s been pretty cold so what else is there to do?

Now our Hannah is not a great cook. She is more of a great burner upper. One day Miss Hannah decided to warm up leftover pizza. She pre-heated the oven and placed the pizza on the shelf…… in the cardboard box. Then she promptly forgot all about it.

John thought he smelled smoke. At first he figured Hannah had probably burned something again. By now the kids were outside sledding. But after a while the smell grew stronger. He decided that he’d better investigate. Soon. Right after he finished the chapter he was reading. The smell didn’t go away and sure enough when he eventually ambled downstairs it was billowing out of the kitchen. Apparently the kids had left the oven door slightly open. He opened the oven the rest of the way which was an error, Flames and smoke leaped out licking up the wall on the side of the big Viking range. John remembers thinking that this thing sure made a powerful fire. He’d never understood why we needed a commercial oven anyway. It cost too much and now it was probably going to burn the whole house down. “Figures”, he thought. John grabbed the box of fire in an oven mitt and decided to throw it out the window.

This was an odd choice, but there was a lot of smoke and so perhaps his oxygen levels were poor and he wasn’t able to think clearly. Anyway he aimed for the kitchen window. Now let me tell you about our kitchen window. It is one of those wonderful old June Cleaver affairs with two mullioned doors that open out. These were the only windows in the house we hadn’t replaced because I liked the idea of calling the family in for supper after a long summery day of gardening and playing badminton or something. But it is winter and we don’t often open the window when it is fifteen below. In fact it is not only closed in the winter, but latched. So, instead of pitching the flaming box out the window, he put his hand threw the glass when he attempted to push it open.

Here I have to tell about John’s hand. John only has one hand. His right arm sort of ends at his wrist. There is a small flat part where you can kind of see how a hand would have developed only it hadn’t. So I am married to a gorgeous man with one hand. This will become important later, so please remember it.

Now this pushing his hand through the window did in fact allow some of the smoke to escape through the broken glass so that was a slight improvement. But there were still flames coming out of the oven, (We clearly don’t clean it often enough based on all the things that managed to burn in there), John’s hand, the smallish one without fingers was dripping blood, and the room was full of smoke. John did manage to get the window the rest of the way open and drop the burning box into the snow. So it was also cold, and steam and smoke were the view outside the window.

To this scene I came home after a board meeting walking through the door with my friend John Sobel and our wet cold sledding kids followed. The smoke was thick. Hannah screamed, “Daddy what did you do????”

Oh, and John was barely visible on the floor behind the long wooden antique pharmacist’s counter. This was where he’d fallen when he slipped on the wet floor where he had apparently sprayed water with the sink sprayer hoping to douse the thing at some point in the whole adventure. He doesn’t clearly remember that part. So he was sitting on a wet floor in a smoky room bleeding. It was quite a scene. We got the dogs upstairs and opened all the doors and windows and turned on the attic fan. Did I mention the part about how it was 15 below outside? That’s below zero. Fahrenheit.

We cleaned it all up and headed to the clinic for stitches since his hand was dripping blood like a faucet. I wrapped it with gauze first and…(here is where you need to remember the part about how he has just the one hand, and that it is a smallish sort of end of the wrist affair)

When we got there the nurse almost fainted holding onto the door when we began unrolling the bandage and she began to wobble and say, “oh…oh…oh!” a lot. John looked satisfied that finally someone was appreciating his pain and taking his predicament seriously. He started telling her the whole story in great detail. Then just as she grabbed onto the table for support weaving and wobbling and I was wondering where they’d taught her this unbecoming behavior, I realized what was happening and finally remembered to say “oh he didn’t have a hand there in the first place’
She had to sit down. But I think she was actually pretty relieved. They sent us a new nurse though.

The next weekend, we went to our dear friends Jack and Karen’s house for dinner. They’d invited a new couple to our regular sixsome. So I was telling everyone this whole episode as funny dinner theater. But the new people were looking on in horror at John’s bandaged hand that was causing such hilarity.

(Now here the whole hand thing is coming back around again. Remember that it is smallish and bandaged it must have looked like somebody had just cut off his hand. Got the picture?)

These poor people sort of smiled at the story at first, but they kept looking furtively at John’s hand and looking at me wildly gesturing and explaining about the fire, and laughing really hard about him sitting in the puddle amid all the smoke and blood. Pretty soon they stopped even trying to smile. They began to look at me as if maybe I were Mengele’s cousin.

Finally I realized why they weren’t laughing and so did John and Jack and Karen and our other friends Roger and Ellen. But of course by then we were laughing even harder, as they looked ever more horrified, we were caught up in the snorting choking kind of hysterical laugh, and none of us could manage to get out the fact that he hadn’t actually cut off his hand, that it was just a few stitches under there. We all must have looked properly crazed laughing and then trying to explain how he didn’t really have a hand anyway, and then laughing like real lunatics over that. We finally did manage to explain, but by then they were pale, and their polite laughter was forced and weird. We found that funny too, and these little inappropriate snickers kept sneaking out. They wound up leaving sort of early. I am guessing we may never see them again…….