December 2, 2008 by Ellen Stimson in Living With Intention 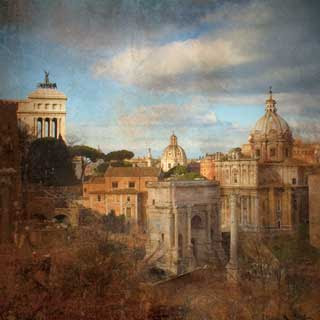 Yesterday I met a 93 year old woman who is in fine health and has lived a wonderful life. She sat in a room surrounded by an extensive art collection. There was a Chagall and a Picasso hung amongst other lesser works and mingled in for color and composition as if they were just beautiful things by any old painters. There were Rodins nestled next to line drawings done by her students. It looked almost haphazard but surely wasn’t. She herself is an artist and her home was seeped in beauty and history.

She had red hair with a wide swath of white down the middle. It was swept back in a dramatic chignon, and her dog Chessie curled at her feet and hoped for a chocolate chip cookie. This lady drove an ambulance in WW11. Her family owned a bank in Switzerland and because they were Jews and Jews were not allowed to live in Switzerland for a time, her dad would cross the border every night back to France where they lived. It didn’t matter that he was one of the world’s most powerful bankers. He was still a Jew. Later they came to America when the war heated up and she stayed behind to drive that ambulance. Next she married a doctor who was also an inventor, and she ran a company that they started together becoming one of the first women to be accepted into the scientific business community in the US. They adopted two children and became part of the Washington DC social scene. She told me that she divorced Stanley once, but they remarried later and spent another fifty odd years together. After studying in Florence, she became a sculptor of some renown. She founded an arts program for people with Alzheimers and built a foundation to support it. Her time in the studio is less now. She finds standing for very long a trial. And she has been a widow for sixteen years which she says is far too long.

She divides her time between DC and Vermont. She still drives, but only during the day to please her daughter. This wonderful woman with the crackly voice telling these keen old stories with a clear Swiss accent told me she didn’t want to live to be 100. Her friends have all died. She lost her closest companion, another older dog, a year or so ago. And now she believes the adventures are all behind her. And maybe they are.

We never know what the next passion or adventure will be. Six years ago I didn’t know I was coming to Vermont or that living close to the natural world would consume my thoughts and my writing. As I sat sipping wine in a local gallery or watching indie films with my hip husband, if someone had told me I would be raising chickens and homeschooling in a remote mountain village I would have wondered what they’d been drinking. But we never know what is just around the next corner. Who will your friends be five years from now? What will you be doing with your life? These questions and the adventures they imply are one of the great reasons to live I think. My new friend may have more coming her way than she knows. But also I understand not wanting to go one when all the adventures are mostly memories. There have to be things you still want to do and people you want to do them with for the journey to have meaning. What do you want to make sure you do in this life you have been given? What ideas are percolating?

I want to live in Italy for a year. I have a crush on the idea of owning a cow. I might want another city life somewhere down the line, and I surely hope there is a bunch of stuff I haven’t thought up yet just waiting to grab my attention and turn my head. It is one of the best reasons to be alive. What is coming next? Who will you be? The best part of all is that we get to pick….