Surprise in the Garden

May 21, 2008 by Ellen Stimson in Country Living, Gardening, Vermont 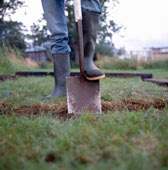 Among the list of things I have never managed to do is grow a proper garden.  You know, one with potatoes, and tomatoes, and beans.  We are good cooks, and I always envy those people who can walk out into their yards and choose a couple of things to whip up for supper.  A bubbly broccoli cassoulet with a panzanella salad all from the garden out back I imagine.  We can get the eggs for the cassoulet from the hen house and the cream from the dairy up the road.  All summer long we support the local farmers, stopping at favorite farmstands and planning our meals by the side of the road.

But actually planting, tending, and picking it myself, I have never done.  I want to pick a bunch of fresh tomatoes and basil in the morning and put a pot of sauce on the stove to simmer.  I want to decide what’s for supper based on what gets picked that morning.  I figure I live in the country now; it is time.

A couple of weeks ago we began the digging.  When the guys were here leveling off the terrace, (this is the one they began fixing for us last year to pay off their old Peltier’s bill), Hannah drove their back hoe and chopped up the ground.  Then John and Benjamin raked in lots of homemade fertilizer, (chicken poop), into the thick loamy topsoil.  We live amidst mountains on all sides here in this high sweet valley.  The nutrients in the run off from the mountains make everything glow with robust health and color all summer long.  It is a short growing season up here, but a lively one all the same.

Next Hannah and I flattened the garden and drew diagrams of where the plants might go.  I had been pouring over seed catalogs last winter and reading gardening books on the plane.  We’d started a few seedlings ourselves and we ordered plants from a wonderful woman in Alabama.  I told her I wanted old heirloom tomatoes.  I mentioned that I love those little orangery ones.

“Oh honey, we got some just as sweet as sugar. I went to Paris France, and we drove around the countryside where I met an old farmer with a whole bunch of varieties I’d never even heard of. Well, he let me take some cuttings and I just wrapped em’ up in wet paper towels. You know I looked that customs man right in the eye and lied straight to his face. Let me pick out a few for you”

So I did.  And they started coming, big healthy looking tomato plants, flowering potatoes, and little French beans that were the cutest things you ever saw.  We needed beets and broccoli and cauliflower of course.  Eli had recently taken to salad so there needed to be lots of lettuce.  Our little garden was going to be crowded and bursting at the seams.  My eyes were much bigger than our muscles had been when we dug that plot.

Last weekend, we began planting the little things we had been hardening off outside.  I remember my Gram hardening off her plants before they went into the ground.  I felt like she was right beside me these last weeks reminding me that the tomatoes ought to get planted up high to where their stems got skinny.  Cover up the leaves so the roots would spread she would say.  It all came flooding back from summers chasing frogs in her yard and half listening to her sing song voice describing what she was doing and why. There has been a gardner living inside my head all these years it seemed.

We drew an X in the ground and planned a square in the middle with four triangles all around.  In between would be little rocky walking paths.  We came in as the sun was setting.  We were all achy and dirty, but in a happy and full way.  The animals had been zigzagging around us all afternoon, and they too were tired and piled in a heap.  We each headed off to showers and decided we’d have to order supper in.

Imagine my surprise looking out the upstairs window down at our little garden when I saw the design we had so carefully created.  There was an X all right through the middle where the rocks were to be laid.  But we’d gotten it a little crooked, something we couldn’t rightly see from down low with the dirt and sweat in our eyes.  But up here it was there plain as day.  We had carved, on our beautiful hillside, just in view of the terrace, a perfect, neatly symmetrical…. eer, ummmm, Swastika.  My friend Maddie who had been my chicken mentor, and gardener extraordinaire, was coming over to see the garden in just a little while.  My dear sweet, Jewish, friend Maddie.  Oh     My     God.

I ran downstairs with new sight to look at it from the front.  Yep, it was there all right.  There were even the little turns at the end where we had each stood flattening our rows of dirt, and leaving perfect little charming Swastika edges.  Just then Maddie pulled into the driveway.  I began explaining and apologizing and she happily laughed til she cried.  It was Saturday and she was headed to temple.  The next morning we got a few cars who came up our road by mistake and had to turn around.  At least that was what I thought, until I recognized some of them as members of the synagogue.  Maddie apparently had shared the story with just a couple of her very closest friends.  Then they told only a couple of theirs. Now every Jew in Vermont has been by to see the garden up on Kent Hill.  Yesterday I ordered a raised bed for the center.  It is white and will be filled with tomatoes.  At 24 inches high it will take the edges off the view.  And the rocky paths will lead to it and the design flaw will be erased by towering sunflowers and sweet basil.  Pretty soon the sauce will be simmering.

I am traveling with cookbooks now and reading up on southern cooking straight from the garden.  I remember my Gram used to read cookbooks at night after working in the yard all day. She had a summer kitchen downstairs that opened onto the yard. It was where she canned and made Divinity candy so sweet it made your teeth ache.  It was where all the long cooking things that would make the house too hot in summer simmered and bubbled away. I still remember the steam swirling through the screen.

I won’t have to worry about the kitchen heating up the house too much up here in Vermont.  But then I bet my Gram never had to worry about a Swastika in her yard either….