The Value of a Really Clean Butt 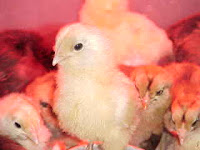 Have you ever seen a geriatric chicken ward? Soon I will apparently be running a nursing home for sweet old chickens who used to like to fly up in the kitchen window when we were cooking supper and beg for scraps. Only now, at three, a couple of them apparently are a little arthritic and so instead of flying up they do a clucking version of a plaintive wail from beneath the window. We take pity and toss our the salad, and they are content. My chickens are three years old. These ladies have a life span of about five years. They lay eggs like crazy for the first two, and then production slows down a bit, and before you know it you are running, (cue up the soft Brahms), The Meadows, A gentle residential treatment center for elderly chickens.

It wasn’t always like this. It all began with a telephone call at 5AM from the local post office…”You have a package here Mrs. Stimson and it is clucking”… I ran over and got my box of tiny day old chicks. You have to order a minimum of 25 so that they will keep each other warm during their desperate overnight trip just after their hatching, sexing, vaccinating, ordeal. You have about 4 hours to get them to drink and about eight to get them to eat. I split an order with another chicken mama wannabe. So we sat oohing and ahhing over the tiny little girls and ran home to the places we had prepared for them. Mine was in our screened in porch where they would live for 4-8 weeks until they feathered out and the outside temperature was a steady reliable 70 degrees. You begin keeping their heat lamp very low and their temperature at around 90 and raise and reduce it every week by five degrees. In most parts of the country they go out at about four weeks, but Vermont springs can be prickly. Sometimes there is snow which can cause delays.

Those days in the screened porch we like just like having a newborn human was. I had to feed them about every two hours at first and keep their water fresh. Their little bottoms had to be cleaned since they had no chicken mama to do the job and it would be about ten days before they figured out hot to manage themselves. Baby chicks can die from not having this done. But they have these incredibly tiny selves and just a little fuzz as their only protection, so it was with gentle trembling hands that their human mama worked. The books warn that humans lose between twenty and fifty percent of their day old chicks. I was determined and conscientious, and quite smug not to have lost any. You would think these were my children’s SAT scores the way I beamed about their clean butts.

After a couple of weeks I added a roost in the form of a long birch branch. It was about two inches off the ground at one end and about six at the other. They practiced getting on, walking tightrope style teetering along the edge, and eventually would come to roost with their little heads bobbing like one those bobble heads in the back of the car window. Then one of them inevitably fell off, and the whole group would tumble in a heap, and run for the safety of the red puddle of light cast from the heat lamp. There was always a wild cacophony of clucking. Their yellow downy backs fluffed up and out as they nervously clucked, chatted, and prepared for another go.

In the months between feathering and laying they grow into a silly very pre teen feminine phase. They are amazingly light and delicate creatures. There is an intense feeling of responsibility when you hold the little soft feathery ounce in your palm feeling every bone quite clearly. They bounce, flutter, and cluck when they run. Sometimes they jump and soar just for the fun of it. These little girls act just like their human cousins who giggle, talk on the phone, and paint their nails.

Finally at about five months they begin to calm down, industriously go about the yard busy and intent on their work, and then they begin to lay. This gift of the egg is something to celebrate. They cheer for themselves every single time. This is the work they were meant to do, and by golly they are proud of it. After a hen lays her egg, she begins with a deep throated cluck that turns into an elongated cackle. She jumps down from her nest and bops around in circles doing her little version of the happy egg dance. They all do it and they each have their own unique steps and patterns. The guttural cluck sounds throughout and can be heard from a good distance. It is the chicken version of “Hey look at me. I did it! I did it!” And it can go on for as long as ten minutes. Since they mainly all lay in the mornings every other day, several of them are often doing their happy dance at the same time which makes for excited barking dogs, (at least in the beginning before they got used to it), and a very lively yard.

My girls and I are having a good run, even as they are entering their baby boomer middle age. Edith, Minnie, Louise, Jenny, Ruby, Mildred, Mary, Mabel, Florence, and Madge might be ready to have a couple of young girls to teach the ropes. They need to know about the dogs, where all the best leaf piles are, how to give yourself a cool dust bath in the hot summer, and what time the humans cook and throw goodies out the kitchen window. Maybe Lulu will be a chicken. And I have always imagined a fat chicken named Myrtle. I think it may be time to get the heat lamp out…..