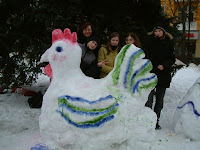 When you move to a place where the thermometer can say, and did say just last week, -17, the weather occupies your mind in a deep and all consuming way. We had just gotten about two feet of snow, and I figured we were done for a while since at -17 it is too cold for snow. But, then it warmed up. It hit a high of 22, and low and behold 18 more inches floated down. It is banked up under the windows on the first floor. The bushes are just barely peeking out over the top. The chickens are snug in the rafters of their house high up by the heat lamp, the dogs are snuggled up with bones by the fire, and the humans are just about losing their minds. Cabin fever has come in and set up house. We are a tad bored, a little depressed, stir crazy, fat from all the homemade bread, biscuits, starchy stews, and cheesecake, and generally pretty sick of ourselves and our myriad opinions. It gets worse when you talk to old friends back in St. Louis who speak about jonquils nosing their leaves up, and worrying if it is too early for them to make it. Puhlease….And somebody said Easter is just three weeks away.

There was only one thing to do and so we did it. I got all the stiff, salty, sludgy snow pants out and washed them. I put lots of dryer sheets in to make them smell nice and feel fresh and soft like they did back in December. We set out mugs and filled them with the spicy hot chocolate that almost burns your mouth. We grabbed gloves and hats, and then we headed out onto the tundra. We carried shovels, and all the dogs and the cat came along. It was a glorious winter afternoon. The sky was blue and bright, and you could see the details of the piney woods on the tops of the mountains in the clarity of all that cold sunshine. We dug holes and tunnels, and built snow caves. Stuart the grandpa Cairn Terrier dug right alongside, while Pippi the baby Moodle chased Zoe the cat, and Eloise, the Bernese Mountain Dog, elegantly sat and watched with patient indulgent eyes. We got so hot and sweaty that our coats were soon piled on top of the snow bank. It degenerated into a snowball fight as we always knew it would. We ran and fell, and chased each other. I made an old fashioned snow angel, and was basking in its perfection when, THWOMP, I got hit in the side of the head with a snowball the size of a grapefruit, and my glasses flew right off. The game was on. We ran after one another, adult kids, middle aged parents, and the twelve year old who gave us all the excuse. Panting and getting ice encrusted snowballs down the backs of our shirts, we screamed and whooped, and wondered if this was what people did in Alaska. The whole thing lasted only about an hour and a half, but by the time we came in, we were tired and cold, wet and satisfied. Our faces were red and our noses were damp. We heated up the milk, added it to the mugs, and built a cheery little fire.

Then we got out spring..the paper mache bunnies, the old glass eggs, the baskets of yarn wrapped eggs, and filled the house with pink and purple, orange, and yellow. Because it is, after all, springtime in Vermont. We have a few feet of snow, mud season is just around the corner, and all the snow gear will go on sale just in time to get some new boots we can try out for the Easter Egg Hunt…..