Where do ya want it? 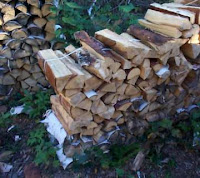 As an added bonus to selling the Alamo, formerly known as The Quaint Country Store, we had our house painted. TQCS had charge accounts and some folks couldn’t pay us before we sold. Once we were gone, it was sort of out of sight out of mind. So I made my round of calls in August, and realized that three of the people who owed us were painters. I told each we would be willing to barter the rest of their bill. All agreed. So we spent several weeks having each of them here, walking around the house, scratching their chins in my front yard. They wandered around the house and drove off the first time promising to call with an estimate. The second time they each, every single one of them, made little drawings on spiral pads while they smoked and walked. Naturally each gave us a high bid and then wanted to credit off the portion that was their Peltier’s bill. I had something else in mind.

My goal was to get each one to do one section, or one phase of the painting, so that I would get the whole thing done with no cash outlay because the combined total they owe us is quite easily large enough to paint a house. But, oh boy. Try explaining to the painters that you need them to break up their bids…powerwashing, scraping, carpentry work on the replacement clapboards, and finally painting; one side, two sides, three…you get the drift. All three guy came again at least twice and two of them made three more trips. None of them came when he said he will. And phones, ha! But finally, after much angst, everybody picked a job. We all shook hands on different days, and finally one day one guy came and the work, miraculously, had actually begun.

Throughout that day both other guys came to make sure the first one was actually on the job. There were workers working while the main guys drank coffee, smoked, and did some approximation of worker dude chat. This required lots of chin movements, toe shuffling, grunting, and some laughter too.

Next the powerwashers and scrapers came. They pulled off all of the shutters..(they belonged to a different guy), leaving behind light green outlines. Now our house looked like a 3d version of a child’s painting. The shutters looked like they had been crayoned on, only the crayons broke and wore out halfway through the picture. It rained buckets all day, so they could only scrape under the covered porches. The powerwashers worked in the rain, and they were loud. The scraping made it’s own obnoxious sounds, while two different radio stations blared from two different sides of the house. Add to that dogs running from one end of the house to the other watching the various men through the windows and barking anxiously. The amazing cacophony of working sounds, radios, and dogs, with the backdrop of the rain made the house especially louder even than usual.

In the middle of all of this a truck pulled up with a load of firewood that I’d ordered last Christmas..We actually ran out of firewood in late March when the snow was deep, and I kept calling, picked some new guy from the Newsguide who also didn’t come, and eventually gave up. We ordered a ton of that firewood you see at 7/11s, for TQCS ostensibly, but really we unwrapped it all and dragged it home. The fellow who finally came, was as near as I could tell the first guy from last December. He didn’t seem to think anything of showing up in September, nine months later, and driving in the rain mind you across my front lawn. I saw him, but figured he was a pal of the workers since he stood around talking to them for about twenty minutes before knocking on my door, to ask…I swear I am not making this up…

“Where’d you like the wood?”
“What wood?”
“You ordered it”….there was a rather longish pause here…

“Last Winter??!!”
“Maybe”
“Wait, you are the wood guy nine months late”
“Looks like it”
“What happened?”
“You said you wanted it to burn”
“YES?”
“It wasn’t ready last December, but it’s ready now”…all said with a perfectly straight dry expression…

…but you said you’d come, you promised, actually twice, then you stopped returning my calls and your wife told me, variously, you were out of town on a job, or asleep….

I said none of this. As we stood, inside the din of powerwasher, scrapers, radios, dogs, and rain, I said….

“Through the fence, we stack it in the walk out basement”

“I just dump it out of the truck. And, it won’t go through the fence”

I wanted to scream you are NINE months late fella. Come on, it’s pouring down rain….

“Okay, how about by the fence”

And he dumped the wood, which was now getting deeply soaked outside my fence, next to the shutters.

This was all over a month ago now..the house is painted and we have warm fires again. But, it certainly brought a certain symmetry to the passing of TQCS.
…..only in Vermont.