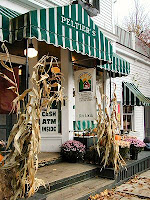 When I was a little girl I read Heidi, and imagined myself a mountain girl eating cheese with a hunk of good bread and a glass of creamy milk from the goats. Then I grew up and married a man who brought me on a romantic weekend to Vermont. It was Heidi come to life.

The VT mountains were smaller and rounder than her Swiss ones, but somehow more comforting and nurturing all at once. We were here in October when everyone falls in love with Vermont. The best meal I have ever had in my life was on that trip from a roadside stand. We bought maple bread and butter pickles, a heavy loaf of sourdough, a hunk of good Vermont cheddar, and a jar of apple cider. We ate on the hood of the car in cold sunshine, and necked and giggled like teenagers. That was the moment our move to Vermont was decided though it would take us another nine years to actually get here.

The questions kept revealing themselves one by one. Where would we live? How would we make a living? What about schools for the kids? And one by one we answered them as only city people romanticizing from a thousand miles away can.

We managed to choose the one Republican town in an otherwise extremely liberal blue state. The grade schools in the small towns were all considering mergers because they couldn’t sustain themselves financially. And nobody makes a living in Vermont…or hardly anybody anyway. You either made it somewhere else, and try to hang onto it when you get here. Or you work several jobs just to keep body and soul together. Lots of people commute to NYC or Boston, or like us buy a local business, lose a whole bunch of money and wait for some other unsuspecting tourist to want their own piece of the romantic Vermont dream.

In our case it was a country store. We could walk to work. We’d buy big fat glass jars and create an old fashioned candy counter….(gross profit not considered into the fantasy), and we’d hire a chef and do take home suppers. Maybe we’d teach cooking classes over the long winter, and people would gather in our kitchen where we’d all drink wine, tell funny stories, and make chicken potpies with Moroccan spicy chocolate inside or something to take home to our families. We poured over the gourmet catalogs choosing wonderful things we’d always wanted for ourselves. Only the neighbors just wanted us to carry gravy…in a jar. Pistachio paste was not something they’d ever needed before and they didn’t plan to anytime soon either. So instead we went broke. It happens faster than you imagine it might. Pretty soon there was no pistachio cream on the shelves and no gas in the pumps either. We couldn’t pay our bills and we were afraid to answer the phone. It was like when you buy your kid an aquarium and wake up to a new dead fish every day. At the TQCS…(The Quaint Country Store), a few more fish died every day. It was a very public death watch.

And the sweet antique building with the two centuries old date carved in the floor was literally falling apart. Only we didn’t have any money to fix it. The night one of the employees called to say that er… um.., there was a little water in the basement, and my husband, (remember him?, the one from the romantic public spectacle by the side of the road), drove down,( walking have long since lost it’s appeal), and found three feet of water and pipes spewing more of it by the gallon, and called the boiler guys, who started pumping it into the street, which fast became an ice skating rink which didn’t further endear us to the neighbors….was a low point.

We sold it last summer and only added to our loss by a few hundred thousand dollars. That actually seemed auspicious, like maybe our luck was turning. We still love the mountains and feel lucky every night when we look up at the sky and see the stars. We are waiting for the healing of time to let the lessons bubble up. Meanwhile we are trying to tell it to ourselves as a funny story. And it was, sometimes even when it was happening….

…Remember the time the tourist fell through the floorboards by the dairy.
And the time the lady drove away from the brand new gas pump without unhooking the nozzle and pulled the whole thing out of the ground and flooded the street with gasoline…..Boy those were the days.