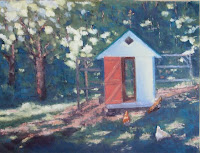 After you live in the country for a while you start wanting things. It is no different from living in the city. You want things there too, mostly new shoes in my experience. You want what you see other people having. If you walk down Fifth Avenue to work every day shoes and scarves and sunglasses make the list. If you live in the middle of the country where the winters are long you want better lip balm and snazzier longjohns. You want what you see.

And what I saw were chickens. Driving to the store, or to a friend’s house for dinner we would pass many farms and some houses with chickens wandering around their yard. Some of them were quite outrageously patterned and all lent a sort of lovely bucolic touch to their landscapes. They were an element not unlike a rock strewn bed of flowers or a pond in the yard. At the farmstand where we got our produce I started to ask chicken questions. Then I did what I always do in these situations, I ordered some books. Lots of them. And so before you know it I was ordering catalogs from hatcheries and mooning over various breeds and yuppie water warmers with cute little chicken track designs on their sides. Next thing you know we had a dozen day old chicks living in our screened in porch. We ordered all girls and planned on a flock of happy ladies who would all take a vow of abstinence. No unruly roosters to stir them up. These were going to be friendly family pets. We gave them names like Edith and Minnie, and Louise and Mildred. They all had old fame lady names and we were in chicken heaven. They would live in the screened in porch for a few weeks until the inside temperature matched an even 70 degree outside temperature for at least a consecutive week. This is Vermont so it would up taking three months…it was July before we finally got them out.

Meanwhile I hired a local carpenter to build our chicken house. His wife and I had split the order of chicks and I had gotten a bunch of Araucanas who would in just a few short months be laying beautiful blue eggs in my back yard. She got a bunch of fancy breeds with funny feathered heads, and we were two families happily engaged in fun hippie communal chicken raising. Matt came and listened intently to my specifications. There were many. I wanted a coop behind the house with fencing that went down about 24 inches underground to protect my girls from foxes. I wanted windows for healthy sunshine. I wanted egg boxes of a certain depth for happier more productive laying, and at least five square feet of living space for every girl. I also wanted a green roof and red doors, and maybe some window boxes. This was gong to be in my yard after all. A weathervane rooster might be nice too. Matt was very patient.

Matt and I were regularly visiting the local general store for materials for the house, for feed, and special lights, watering troughs, and bedding. I often chatted with Ted and all the guys there about our chickens plans. Now these guys were Vermonters. And I was most assuredly not. Their chicken’s lives varied a bit from mine. They teased me about our yuppie chickens and I secretly pitied thiers. By the time Ted learned that I was laying a soft bed of pine, outside, in the coop, he and I had grown rather tired of each other. He offered some more amused commentary about chickens living outside and how I seemed to want to change the nature of nature. This was becoming too much for me. We had been having these ‘you dumb city girl’ conversations for weeks as the house went up along with my general store bill. I explained that for the first few months their feet hadn’t fully developed the protective skin that would keep them from getting parasites and that many chickens died from these foot parasites. He asked, in a particularly sarcastic voice, where I’d learned that. So I answered him………”they hide that information in books”

This kind of put a damper on the whole communal chicken raising party.

But pretty soon the girls were living happily in their house and in fact the freshest tasting, beautiful blue, almost turquoise eggs were coming our way. Then one day we heard an outrageous sound. We ran outside to see if something was after our flock. To John it looked like one of the chickens, maybe Gertrude, was making the noise. He thought that without a rooster maybe one of the girls had taken a sort of a lead chicken role and was acting like a rooster. Okedoke.

Now this was in no way your traditional r rr rrrrrr. It was sort of a garbled rrr-aughhh. John’s theory was that these were pack animals and a leader was emerging. Uh-huh. My own theory also suffered from some gaps. I thought it was an owl of a new breed we hadn’t heard before. I was constantly on alert scanning the woods looking for this new creature.

Until finally, Gertrude began to grow a comb. The facts were too obvious even for us to ignore. It seemed our Gertrude was not a hen at all, she was a pubescent rooster whose voice was changing. The cracking cockle doodle doo was a weak imitation of the sounds to come. But yes, our Gertrude was a boy. The 0.1% sexing error at the hatchery had come home to roost… as it were. How to tell a rooster from a hen…apparently they hid that information a little too well in that extensive chicken library of ours.

Now we just had to figure out a new name…..