Bears, and Bats, and Cows, OH MY 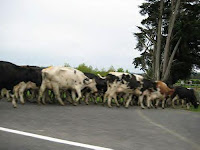 When a person first moves from the city to the country, no matter how long the dream has been conjured, there is still a certain amount of transition shock. This goes both ways of course. The locals are shocked all over again at the stupidity and sheer witlessness of people who have managed to live forty years or more, and often held down respectable jobs, sometimes earning quite nice livings along the way. How could these people, who shriek at the sight of a teensy little bat, occasionally hurling whole mattresses, (called newly into service now as a flying rodent trap), complete with 1000 count sheeting out windows and over balconies, have ever managed anywhere they must wonder. And the recent transplants likewise wonder how civilization has failed to take root this close to real life where cell phones don’t work, street lights are non existent, and bears destroy the bird feeders.

I have a friend who moved here to the mountains of Vermont just a few short weeks ahead of us. She warned me about calling the police. Her husband was selling their family home and closing his office readying it for the move north, while she and the kids settled into the new house. She had fallen in love with the postcard villages, the woodsy hikes, and the idea of raising kids and dogs in such a natural setting far away from the concrete, lights, and sirens. Unfortunately with the nature, the quiet and the
dark came a little wildlife.

When the first bat flew around her living room she called 911….the Vermonter who took the call was not amused. He suggested she call the Batline instead. Trish thought it must be like some sort of wildlife rescue service. She tried in vain to find such a number in her directory and using 411.

Eventually she trapped the scared little creature in the guest bed, and hauled the mattress, bedding and all, to a balcony door and threw it over. Feeling triumphant, she expected to see the bat fly right out. When it didn’t she began to worry it would suffacate in the bedding. So, using a long handled mop she went out and moved the covers around only to find that the bat had escaped. Back in the house it flew lazily around the living room again where she finally managed once more to trap it in a mostly unpacked closet. She called 911 for the second time. This time the guy routed her to the local volunteer fire chief who called his youngest crew member, and no doubt giggling, sent him on the call.

Tim, a quiet capable Vermonter, showed up and gruffly asked where the bat was. She offered him tea of coffee, and was chatting madly as he just silently went where she directed. When he opened the closet the bat flew right out as Tim made a mad grab for it before it got airborne. The bat got away, but into Tim’s hands fell a bag of gag gifts Trish was planning to wrap for an upcoming bachelorette party in the city. He tried to shove the bag back in and follow the bat, but he got tangled up in the blankets and clothes, falling backward, where the bag opened and spilled onto the floor. Trish stopped screaming over the bat and looked down at a pair of licorice laced panties on Tim’s knee. Finally he looked up, smiled, and said, ” My name’s Tim.”

This amusing little anecdote should have warned us all off. Certainly I would never call 911 over something as ridiculous as a bat. Nosiree, not me. I was apparently planning to wait for a cow. In my defense it was a bunch of them, and I was driving very far, and running late for a manicure appointment, but still.

So, there I was on a picturesque short cut to Rutland. The back roads were winding and went straight through the mountains. A little pretty river meandered along the road and I was glad to have found this beautiful drive and planned only ever to take it and not the main roads, because I had moved to Vermont for a reason by God. I was here to enjoy the beauty and enrich my soul, and so no highways for me. Only on this particular Monday it was raining and muddy, and the road was slow going. There up ahead was something blocking it. I was squinting through the windshield drizzle,slowing down, and eventually breaking hard to avoid the 8 or 9 cows who were at various spots ahead smack in the middle of my pretty road. It is a two lane affair and on the curves that is a generous description. There was no going around these big girls with the river on one side and the tree line on the other, and the road itself was a messy bunch of ruts, so turning around didn’t seem likely either. What to do? Well, okay, I called 911. I mean the road was blocked right? Isn’t that like when a car rolls off into a ditch, and you alert the police? Or when there is a guy with a blown out tire blocking the road. Or….well, you get the idea. Only I didn’t have very good cell service, really it was a miracle I got through at all. And so there I was, on a rainy road, trying to make myself understood through the crackles and an officer’s voice breaking up asking me to please repeat what I had said. I repeated it slowly and louder each time as if volume alone could cure the connection. And, yes, pretty soon I was screaming at the 911 officer that THERE WERE COWS…ON…THE… ROAD!

As bad as the connection was though, his answer came through loud and clear, “If I was you I think I’d tell em’ to move.”

I’ll leave you to imagine the rest. Picture me getting out, in some pathetic shiny city shoes, this was early on before my conversion to boots, in mud nearly to my knees, and saying shoo, shoo girl to a 1500 pound wet cow. They made a sound that did not quite sound like moo, and so I slipped and sloshed back shivering to the car heater where I waited for the girls to decide to move on. Please also imagine the car running out of gas and me slip sliding up the road to a farm house where no one was home which was why they didn’t already know about the broken fence. And imagine my letting myself into their house, because no one in Vermont locks their house, and calling John. You can probably hear him quietly listening, and see him in your mind’s eye trodding out to the car. He sweetly brought me coffee because even I wasn’t brazen enough to make a pot in that stranger’s kitchen. He also brought warm socks which made me want to marry him all over again.

We did leave a note though. It said …”there is a hole in your fence and your cows are loose.”

Because we are Vermonters now, and we stick to the facts.